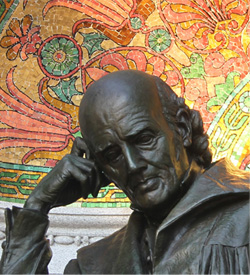 The Slovenian Homeopathic Society was established in May 1992 to research and promote homeopathy as a medical practice in Slovenia. Full membership is only awarded to medical doctors and dentists who express interest in homeopathy, and wish to deepen and further their knowledge on homeopathic treatment.

Since the beginning, the Slovenian Homeopathic Society has been in charge of postgraduate education and training in compliance with the ECH Medical Homeopathic Education Standards. The three-year postgraduate education programme is conducted in the form of long-weekend seminars with theoretical and practical part. Lecturers are homeopathic physicians from Austria, Germany, the Netherlands, Slovenia, and other European countries. At the conclusion of a three-year programme participants have to pass the final exam in order to receive a certificate of qualification for homeopathic treatment (medical doctors). In 2006 our teaching programme and examinations of the teaching have been accredited by the ECH and in 2007 first European Diplomas for Homeopathy were given to Slovenian medical doctors.

We are striving for homeopathy in Slovenia to become a part of national health care system, and for medical doctors and patients to be able to freely choose the most appropriate method of treatment.

In October 2007, the Act on healing practices (Official Gazette of the Republic of Slovenia, Nos. 94/2007, 87/2011) was brought in by the National Assembly of the Republic of Slovenia. As stated in the second paragraph of the Article 6: "Notwithstanding the preceding paragraph, homeopathy, chiropractics and osteopathy shall only be performed by persons with a degree from a medical school, knowledge of homeopathy, chiropractics or osteopathy and a valid licence acquired in compliance with this Act." The Act has not been fully implemented yet. In 2009, the Ministry of Health started the revision of the Act to simplify all procedures and eliminate administrative barriers and burdens (essential changes: not to establish a »Chamber of Healers«, not to issue licences for 7 years, but to establish a public register of practitioners etc.). Due to frequent changes of the ministers of health and governments the amended act has not been passed by the National Assembly yet.

In June 2008, some new paragraphs were introduced in the amended Medical Doctors Service Act (Official Gazette of the Republic of Slovenia, No. 58/2008) to strictly prohibit medical doctors from practising homeopathy. If they practise it, the Slovenian Medical Chamber may never issue a license in the first place or may revoke the medical doctor’s licence either temporarily or permanently and she/he will be struck off from the Register of medical doctors. A fine ranging from € 650 to € 1200 could be imposed on a medical doctor using homeopathy or any other alternative form of medical treatment. All doctors and dentists in Slovenia are obligated to register with the Medical Chamber of Slovenia and be licensed as independent medical services practitioners in order to work independently.

Medical doctors with a licence can only practise conventional medicine and acupuncture, which is the only alternative form of medical treatment they are permitted to practise.

On 17 December 2014, the assembly of the Slovenian Medical Chamber called upon the Ministry of Health to change the restrictive regulations so that the licences of the doctors practising homeopathy would not get revoked. The decision to change the Medical Doctors Service Act, which threatens doctors practising homeopathy with a revocation of licence as a punitive measure, was passed with a 40–18 vote at the Assembly. The Ministry of Health has finally acquired the »historical permission« from the Slovenian Medical Chamber to change the restrictive and discriminatory regulations. This is the first step. Now, the Ministry of Health has to prepare new regulations, which need to be adopted by the National Assembly.

Directive 2001/83/EC of the European Parliament and of the Council on the Community code relating to medicinal products for human use, which includes homeopathic medicinal products, was transposed into national law, notably with the new Medicinal Products Act, adopted in March 2006 (Official Gazette of the Republic of Slovenia, Nos. 31/2006, 45/2008, 17/2014) and the Rules on homeopathic medicines for human use, adopted in October 2008 (Official Gazette of the Republic of Slovenia, No. 94/2008).

For the first time, the Agency for Medicinal Products and Medical Devices of the Republic of Slovenia issued five-year permits for homeopathic medicines on 30 March 2011.

We have also other aims:

The Slovenian Homeopathic Society is an institutional member of the Liga Medicorum Homeopathica Internationalis (LMHI) and the European Committee for Homeopathy (ECH).